Initially, it was supposed to be per January 1st, 2015. But we got some respite until the 30th of January. The new terms and conditions of Facebook in the Netherlands wil be valid per that date. The conditions state that Facebook is allowed to use your profile picture and use it in advertisements.

I already have a relatively closed profile, I only share information with friends. In this case it does not make a difference. If these friends have an open profile, and they would share a post from my account, then FB is still allowed to use this information.

You could say ‘just quit Facebook, already’. I must admit, I tended to quitting. I like Twitter better because of the speed of the messages and how easy it is to stay on top of news. And I think Facebook is a big fake anyway. A while ago, I placed a message on my timeline about my oldest son, with whom I was in the hospital for an EEG of his brain. It was a funny message, since the electrical cords were attached to some sort of switch-plug with the words ‘Gender Changer’ on it. I was joking ‘no doctor, that is not what we are here for…’ And to my son, joking: ‘Although I DO have three SONS…’.

I received enough ‘likes’ for this joke (and no worries, my son had to laugh too, I love all three of my boys equally and would not change a darn thing). Though this is not the point. Hardly anyone was alarmed by the EEG and contacted me if everything was okay.

Maybe the docters suspected something severe, who would know? Well luckily, nothing terrible in that way! My real friends in the real world were already informed and caring. Though it did make me feel the extreme shallowness of social media and its users. However for my company and business purposes, I feel the need to keep using Facebook.

These are the terms and conditions by Facebook: (please state that this is my own translation from Dutch to English, I am not responsible for any mistakes made)

You hereby agree Facebook is free to use your name, profile picture, content and information for commercial, sponsored or related content that is being offered or improved by us. This means for example that you allow a company or other entity to pay us to use your name and/or profile picture with content or information, without having to compensate you for this. If you selected a specific target audience, we respect your choice.

Facebook is starting with social advertisements in the Netherlands, because people near you are more probable to buy a product when your profile picture is in the advertisement, stating you also purchased one. In other words “She bought it, it must be okay”.

Now, I am a very suspicious person by nature and therefore I do not want Facebook using my photos and information, ever. When I was forced to use Messenger to read my FB messages on my mobile, I declined. As a result, to read my messages, I need to log in by iPad or laptop, but who cares: most of the time, there is nothing important going on, and in case of urgent matters, people will know how to contact me anyway. 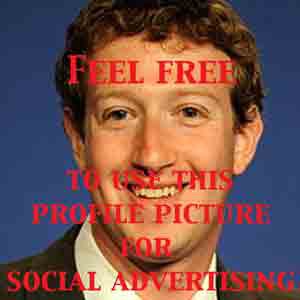 Let them use this picture for social advertising! Seems like a positive (re)action, and a ‘win-win situation’! I would like to encourage all nine million Facebook users in the Netherlands to do the same! See what Mark does…! Change his face??